What Is Premature graying treatment?

There’s something to be said about people who suffer from premature graying of hair.They’re distinguished..dapper..and …20?

Yes, thats true. Premature graying of hair can start very early in life, as early as during childhood or teens. The severity can range from a few streaks here and there to a head full of gray hair. What are the causes of premature graying?

Premature graying makes one feel older and therefore is a cause of great concern and embarrassment especially amongst the younger generation.

So what makes some people gray early and while don’t see a sign of gray until age 50.

It took a while but scientists have finally been able to find a concrete reason why hair turns gray. Hair follicles contain pigment cells that produce melanin, which give the hair its color. It’s due to accumulation of hydrogen peroxide in the hair roots which causes the malfunctioning of these pigment producing cells leading to hair graying.

The premature graying is largely genetic. If your parents or grandparents grayed at an early age, you probably will too.

Graying of hair can also rapidly increase due to emotional stress.

Hormonal Imbalance and Thyroid disorders like Hypothyroidism and Hyperthyroidism wherein the pigment activity from the cell reduces can lead to graying.

In this condition, there is graying in a bunch of hair at one time. Several such bunches appear one after another, and can spread quickly to other hair on the body. Pernicious anaemia or Vitamin B12 deficiency

Pernicious anaemia or Vitamin B12 deficiency is one of the common causes of premature graying in children. In such cases, apart from graying there are associated symptoms like fatigue, shortness of breath and in some cases chest pain.

commonly known as white patches or leucoderma can also result in loss of hair pigment.

Prematurely gray hair is often one of the earliest signs of Werner’s syndrome, a rare autosomal recessive disorder, commonly found in the age group of 8-20 years.

How is Premature Graying treated?

Most cases are irreversible and therefore the best thing to do is to slow it down or control it in the early stage. Identifying and treating underlying medical conditions and correcting dietary deficiencies can help to control the progression of the graying. 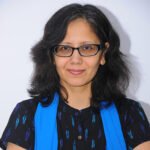 Dr. Pranjal Shamsher is the first Skin Doctor in Bangalore to offer natural, non-surgical and non-invasive treatments for skin disorders. She is a Registered Medical Practitioner (Registration No A-6516) and a true pioneer in Skin-Friendly Treatments.

Dr. Pranjal Shamsher is the first Skin Doctor in Bangalore to offer natural, non-surgical and non-invasive treatments for skin disorders. She is a Registered Medical Practitioner (Registration No A-6516) and a true pioneer in Skin-Friendly Treatments.